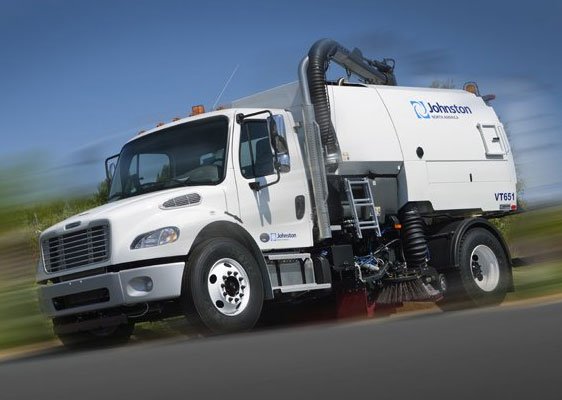 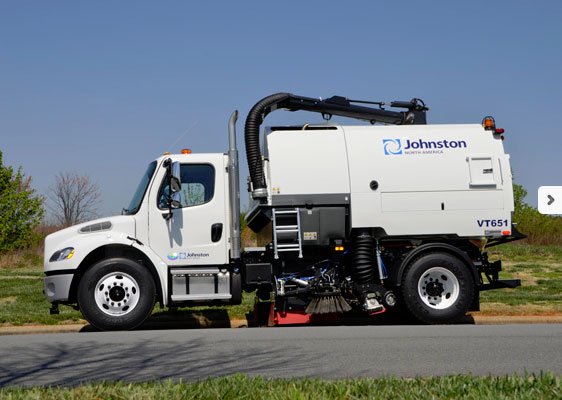 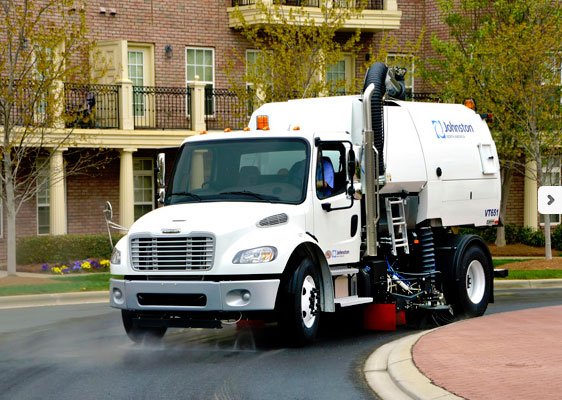 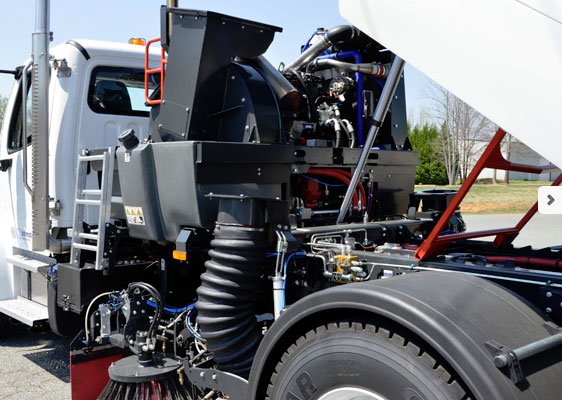 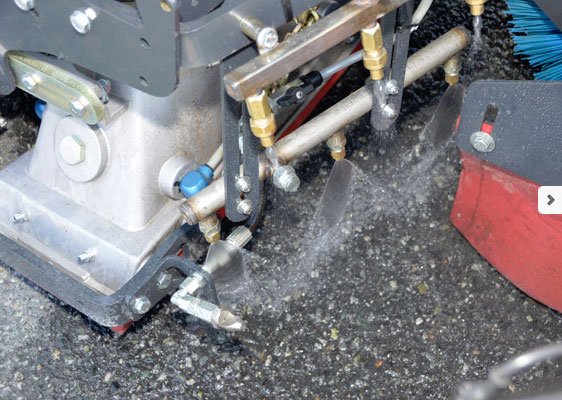 VT651 Represents Over 50 Years of Evolution – The V Range has established itself as Johnston’s most reliable and dependable truck mounted sweeper. The Latest V Range sweepers have been developed from over 50 years of evolution and continuous improvement to meet customer requirements. The V650 and V800 models are being replaced by the VT651 and VS651, and VT801 and VS801, which are evolutionary improvements suggested by our customers across the world.

View BrochureView Specs
Longer on-station time than ever, lowest-ever running costs and more than one thousand design upgrades – all powered by an evironmentally-friendly and fuel efficient engine years ahead of its time. These are just some of the ground breaking features of Johnston’s new-generation VT651 truck mounted sweeper range.

In a bold move, Johnston Sweepers has completely re-launched its V Range truck mounted sweeper line-up, entirely replacing the current models to bring to the market a product which boasts Johnston’s longest-ever on-station work time, even lower running costs and a host of new features to make sweeping more efficient, cost effective and friendly to the environment than ever before.

The new VT651 is the natural evolution of the hugely popular outgoing VT650 model, incorporating literally thousands of customer-led design upgrades as part of Johnston’s commitment to customer feedback and design excellence.

The launch of the all-new VT651 follows three years of intensive design and testing by Johnston’s engineering team, which has involved re-examining every single component of the V Range to bring the clever new sweepers to market.

Power to the acclaimed auxiliary engine system will be supplied by a range of the cleanest and most efficient engines available, designed and built in Britain by JCB. Brand new to the Johnston range, the engines were chosen for their advanced engineering, the 55kW pack already meeting future Tier 4 final emissions legislation – the only engine able to do this in its displacement class without the complication of requiring SCR (Ad-blueTM) after-treatment systems to clean the exhaust system. The engines deliver even better fuel consumption and lower emissions than ever before, reducing operating costs and helping authorities to improve their air quality scores, whilst also lowering vibration and noise generation for greater operator comfort and less noise pollution.

One of the most immediately striking features of the new range is the increased on-station work time, made possible by larger water tanks with a 21% increase in capacity on the V651), combined with all-new improved water jets, which make a more intelligent use of the water for maximum dust suppression and water conservation.The jets in the nozzles are now also self-unblocking so that the water system is always ready for action. This, together with an increased hopper capacity on the V501 model means fewer returns to base for re-fills and keeps the sweeper out at work for longer.

All this improved efficiency and economy can now be tracked by customers for themselves through Johnston’s clever CANbus control system, introduced for the first time on the truck mounted sweeper range having been well-proven on Johnston’s compact sweepers. At the heart of the system is a new 7″ color screen which displays all the operational information needed by the driver – including, for the first time, an in-cab water tank gauge – as well as the diagnostic data for safety and maintenance. The screen can be linked to up to four cameras around the sweeper for greater visibility and safety.A really invaluable feature of the new system is its data capture facility, which allows information such as fuel consumption and hours swept data to be downloaded to a memory stick via the screen’s USB port. This real-time cost and operational information is a facility that fleet operators are finding increasingly valuable in the monitoring and management of sweeping operations and costs – and allows customers to see the evidence of Johnston’s claimed fuel savings for themselves! The controls for the CANbus system itself are now all located by the grab-rail on the door, supplying ergonomic and easily accessible operation without having to take your eyes off the road, while the old relay box has now gone to make more space inside the cab.

In-cab controls are ergonomically positioned to provide safe and easy operation while sweeping.A full CANbus integrated control pad allows the operator to safely adjust all the sweep options.The CANbus system monitors sweeper performance and provides daily checks. The display incorporates as standard an audible and visual raised hopper warning, fuel gauge, engine hour meter, tachometer and a water level gauge. In addition, data can be downloaded via a USB stick, showing a range of information from fuel consumption to average sweeping times.Throttle control of the auxiliary engine is infinitely variable ensuring optimum operational and fuel efficiency with no performance compromised. With a 1500 rev Eco-mode built into the V Range, fuel conservation is enhanced and noise levels are reduced.Pendant controls connected via a flexible cable allows the operator to safely tip the body and open the rear door from either side of the cab, at the same time maintaining a clear view of the tipping area.

There are no reviews yet.

Be the first to review “Johnston VT651” Cancel reply